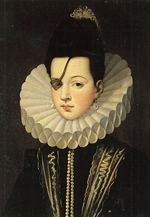 Ana de Mendoza y de la Cerda, universally known as Princess of Eboli, was born in Cifuentes in 1540. She was the only child of Diego Hurtado de Mendoza, viceroy of Perti and Duke of Francavilla. She married, in 1552, Ruy Gomez de Silva, secretary of King Philip II of Spain and Prince of Eboli. After her husband’s death she was fascinated by aSanta Teresa d’Avila and her Reform, so much so that she offered to build the convent of the Carmelitans in Pastrana. In 1577 she returner to Madrid and at the royal court she became the centre of intrigue because of her plots against Philip II which lead her to live the last years of her life segregated at the royal palace of Pastrana, where she died in 1592. 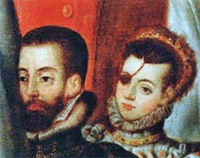 Ana de Mendoza y de a Cerda, Princess of Eboli was born in Cifuentes in 1540. She was the only child of Diego Hurtado de Mendoza. In 1552 she married Ruy Gomez de Silva, secretary of the king of Spain. After her husband’s death in 1573 she found a passion for Saint Teresa of Avila and her Reforms, so much that she volunteered to build a convent of the Carmelitans in Pastrana. She decided to become a carmelitan herself, however her lifestyle didn’t reflect this decision and the other sisters abandoned her. 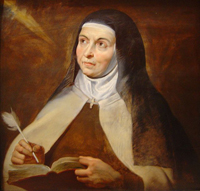 The death of her husband left her with a great inheritance. She had a great friendship with king Philip II, which made her very feared among the court. This friendship also sparked rumours about her having an affair with the king. She also had a strong bond with Antonio Perez, which was a friendship that greatly benefitted both parties. Ana was trying to take over the throne of Portugal which Perez helped her with by manipulating the King. However when the King found out about their plane had them both arrested. Some say that the reason for the arrest of the two was due to the King’s jealousy of Ana’s relationship with Perez. The two were imprisoned in different locations.

In 1581 she was transferred back to her residence in Pastrana because they said her mind was now ill. She spent the rest of her life in house arrests. In 1590 Antonio Perez was able to escape. In order to stop the two lovers from meeting the King had bars installed in all doors and windows of Ana’s residence. She was only granted one hour of fresh air a day on the balcony of the palace that faces the “Plaze de la hora”. 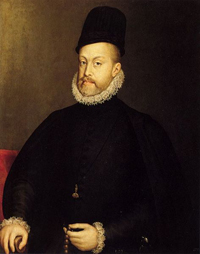 Ana de Mendoza died on February 2nd, 1592. Eboli and Pastrana are twin cities since 1998 because of this strong link between the two.

Black Legend: Given her history, her charm and mystery, accentuated by the bandage over his right eye, the worldly life, love, real or imagined, the political intrigue, the long imprisonment and the silent death, many authors have defined the life of Anna de Mendoza y de La Cerda The Black Legend, a definition that is still present in the collective imagination. The Black Legend was also fed over the years by artists: the whole affair was shooting freely in the eighteenth century by Schiller for his "Don Carlos", later set to music by Giuseppe Verdi who made the character of Donna Anna with the role of a mezzo-soprano, and the name "Eboli", as opposed to the character of the "Queen" love rival. Verdi does sing to the character of Anna, perhaps the most beautiful arias in which she regrets her beauty, which he calls "fatal gift ... cruel gift," believing the cause of its vicissitudes and hardships but, at the same time, his greatest weapon of conquest. Another author got his inspiration from such legendary figure is the Irish writer Kate O 'Brien.

EBOLI AROUND THE WORLD