From Spanish Viceroyalty to the Bourbons 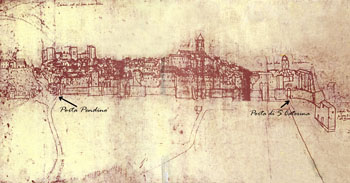 During the first half of the sixteenth century the city almost doubled in population. This increase was matched by an increase in houses built within the city walls. The city was divided in parish districts and quarters; this distribution was kept untouched until the first half of the twentieth century. An important event happened in 1531. With official orders from Pope Clement VII the church of S. Maria della Pietà was elevated from church to Collegiate Church. This affected the organisation of all the local ecclesiastical activities and brought about an increase in construction however the clergy invested it’s money in the restoration and enhancement of old churches rather that in building new ones. In 1562 the Cappuccini Monks arrived and settled in the S. Antonio de Vienne convent which had been abandoned. The church of S. Francis was enriched with frescoes by Andrea Sabatini. Other frescoes from the same period have recently been found in the church of the Madonna di Loreto and S. Maria ad Intra. Under the Doria, from 1640 until the abolition of feudalism, the upgrades to the city and its modernisation continues. The “tavolario” Pietro de Marino puts an estimate on the estate of Eboli following the extinction of the Grimaldi family and provides the first accurate description of the city; with its five doors, walls on the northern front, steep slopes on the west and on the east Tufara. In the 17th century there were five convents within the city centre of Eboli. There were hospitals for the care of the ill and pilgrims. It had an important intellectual class which included lawyers such as Prospero Caravita, priests and missionaries like Matteo Rippa known as l’Orientale and notaries, but most importantly it had proud and united citizens which were aware of their rights and prerogatives. It is with these citizens that anyone who came to Eboli with bad intentions had to deal with; all the people who came to the city wanting to take possession of Ebolitan goods and limit the city’s rights. An example of this is the episode of the “Arco die Tredici” or Arch of the Thirteen, the killing of thirteen nobles in 1647 which still resounds in the people’s memories as a symbol of rebellion against abuse and oppression. 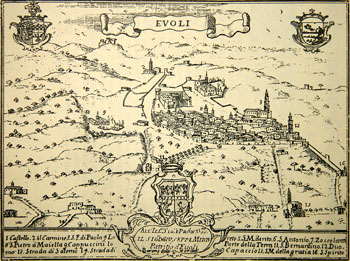 It is in the 18th century that Eboli’s population sees an important rise with a census of about 5,000 inhabitants. The city’s goods were divided between University defences and land for civic use. The university’s money was plagued by corruption and subject to boycott. Pacichelli describes Eboli in his book “The kingdom of Naples in perspective” in 1703. The expansion and modernisation of the city continues under the reign of Charles of Bourbon. Very few Ebolitans leave donations for the convent monks of St. Francis. They now administer a consolidated capital and their main interest is the maintenance of the property and heritage accumulated in the past. In 1742 St. Francis convent owns 50 properties of different types from forests to olive groves and uses the invested capital to build new dormitories and to pay for the work done by Nicola Lamberti, a master marble worker of Naples.

Half way through the century, the church of S.Antonio de Vienne is refurbished. It is often visited by King Ferdinand IV and Queen Maria Carolina in 1774 during their stay at their royal Casina di Caccia di Persano. In December 1761 works to refurbish the Collegiate Church begin, lead by maestro Pietro Desiderio di Angri, the marble sculptor Don Carlo Tucci and contract work by Sabato Confronto of Calvanicoo e Gennaro Contursi di Cava, both renowned entrepreneurs of their time. The church of St. Maria dell Grazie was also modernised. Still in the 18th century, as described by Natella regarding architecture, the atmosphere was Italian and European.