Parishes in the Modern Centre

The Parish Church of Santa Maria delle Grazie is set in an ancient monastery, built by the Dominican Friars in the late fifteenth century. After being supressed in 1652 by Pope Innocent X it is granted in 1690 to the Reformed Fathers of San Francesco. The convent is suppressed again by the revolutionary laws of 1807, and the French assign the church as Headquarters Troops. From 1807 to 1932 the monastery complex is the rectory. In 1932 the convent and the church are given to the Daughters of Christ the King, fled to Italy after the religious persecution and civil war broke out in Spain. The Convent is completely destroyed by bombing in 1943. The only remains standing are the bell tower and facade of the church. In 1952 it is completely rebuilt. The Sisters of Christ the King return to it 1961. In 1970 the church was given a beautiful floor and, after the 1980 earthquake, the entire structure is completely renovated, except for the façade and the baptistery. The church has a single aisle with a main altar and three altars on each side. 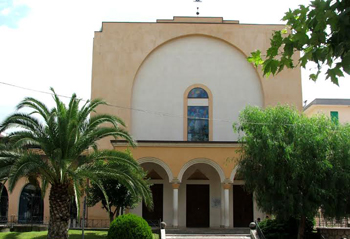 The first mention of the parish church of St. Bartholomew the Apostle dates from July 1168, in a document where it says that the brothers Matteo and Nicola divide the father's possessions. In 1654, the parish of St. Catherine (now St. Joseph's Church) was suppressed and joined to the one of St. Bartholomew. The church of St. Bartholomew was a single aisle with the main altar and two side chapels, one on each side. It was set at the crossing of stairs that bear the name" Salita San Bartolomeo" with Via Roma, just on the right as you go up. In July 1917, Msgr. Grasso, archbishop of Salerno, visit the parish, where he admires on the painting of Our Lady of Peace on the altar, and notes that the work is of a high artistic value. But both the church is the work of art, were all destroyed by bombing in 1943. The only thing saved was an ancient bust of San Bartolomeo which was rather short and of rough stone. 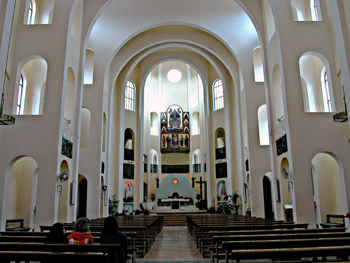 The new church of St. Bartholomew was built from scratch, where the sports field “Littorio” was, and later, after the visit of Mussolini in 1935, became known as the “I do not care", as the words of exclamation that the Fascist dictator spoke at Eboli, in response to the economic sanctions decided by states belonging to the League of Nations, following the attack of the regime against Ethiopia and that led to the subsequent war in Ethiopia. With religious ritual, the temple was solemnly blessed on December 8th, 1957. In the new parish territory there is also the chapel of Santa Maria del Soccorso. On November 29th, 1965, in the church of San Bartolomeo, Mr. Bernas Zdzistaw invited his friend Carlo Wojtyla, archbishop of Krakow in Poland and the future Pope John Paul II, to administer the sacrament of Eucharist to his nuns. Due to the earthquake of 1980, the church suffered severe damage. The place of worship was reopened the 1st of June 1999. On the central altar is preserved the beautiful altarpiece, the work of neo-Gothic Augusto De Rose Orange. 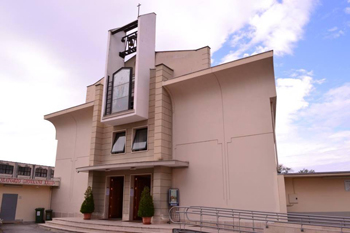 The ancient parish church of Santa Maria in Intra was located in the highest part of the city, next to the walls of the Colonna Castle. It was named like this because it is located in “Intra” or “between” the walls. With Archbishop Decree of 1962, the title and the benefits are transferred to the parish church to be erected in Paterno. The first functions are held in a civilian home. The new church is called Our Lady of Consolation in memory of the old fresco that is located in the oratory at the side of old church of Santa Maria in Intra. Waiting for the end of construction which had begun in 1968 in Fontanelle, a new building was temporary used as church headquarters, which later became the permanent location of the parish because the works of via Fontanelle were never completed. The church was recently restored and in the bell tower you can admire the artistic bells of old church. 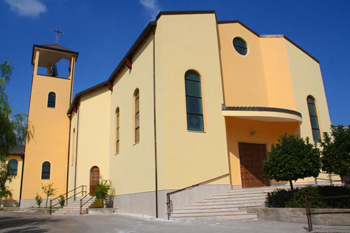 Sacred Heart of Jesus and St. Berniero: after the earthquake of 1980 in the City a new neighborhood in the Pescara area was born. For the pastoral needs of this area, Msgr. Italo D'Elia, Vicar General of the Diocese of Salerno, asked for territory to build a church in 1981. After the consent of the City of Eboli a prefab for the conduct of religious services was donated by the Diocese of Treviso. The church is dedicated to the Sacred Heart of Jesus, always by the will of Msgr. Italo D'Elia, to remeber the consecration of the town of Eboli to the Sacred Heart of Jesus which took place March 28, 1928, and of San Berniero, patron of the City. In June 28, 1986, the church becomes a parish with effect from 18 July 1986. Its territory is entirely detached from the parish of Santa Maria delle Grazie. Over the years, with the rise of the pastoral activities the