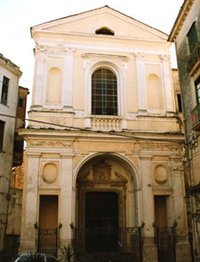 The church was built in the twelfth century with the original name of Santa Maria de Conce, for the presence of a tannery in the area. It is called this name in a document dated 1309. The name was probably changed at the beginning of the sixteenth century to the current name of Santa Maria della Pietà: a document from 1511 refers to the church with its current name. Two decades later, the church was elevated to Collegiate Church by Pope Clement VII, with the Bull "In supereminentis Apostolice dignitatis', dated 4 May 1531. In 1702 the church is enriched with a wonderful wooden group called Santa Maria della Pietà, work by the famous sculptor Giacomo Colombo, ordered in 1696 by Don Antonio de Clario, a member of one of the richest and noblest families of Eboli. This statue is taken on procession only for major events. The last one was the Jubilee of 2000. On the 17th August 1741, Pope Benedict XIV gives the Collegiate the signs for Primicerius. On August 8th, 1811 it is called “eminent Collegiate Church Maggiore” with 22 members. On July 13th, 1866 pursuant to the revolutionary laws the Chapter is deleted: All goods are confiscated by the State. In 1880 it is elevated to parish by the bishop Laspro. The Collegiate church was rebuilt after the bombing raids of 1943 and in 1971 it was fitted with a new entry. It's last restoration was carried out following the earthquake of 1980. 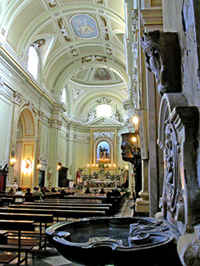 The Church has a single nave covered with a barrel vault. The sides of the nave are divided by chapels (three on each side) framed by round arches, set on pillars decorated with pilasters and Corinthian tops. The nave is followed by the presbytery covered with a dome. From the central arch to the left side you can access to a chapel covered with a dome. On the right side, to the entrance hall that consists of a porch with stairs which lead to the Republic Square. On the same side stands the bell tower made up of three floors decorated with corner pilasters that rise on a high base, built in 1858 and designed by architect Francesco Paolo D 'Urso.

The old facade faces the old town and is divided horizontally. At the bottom there is a porch decorated with an order of pilasters and higher education are located two niches and a central lancet window with balustrade. The main altar is from the eighteenth century and made in polychrome marble; same material as the banner which presents the efigy of the Ferrari and Novella families. 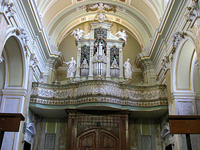 Also in the area of ​​the presbytery is carved choir stalls which along with the confessional, are a typical example of sacred wooden furniture of the eighteenth century. In the presbytery, behind the central altar there are two wooden statues depicting San Rocco (taken from the ancient church of San Rocco demolished in order to build the current “Corso Matteo Ripa”) and Sant 'Alfonso de' Liguori. The organ from the eighteenth century is placed in front of the statues, it was made by the master Silvanio Carelli Vallo di Novi, or Vallo della Lucania, with lavish decorations in rococo style. The wooden sculpture representing San Vito patron of Eboli, by the Neapolitan sculptor Raffaele Balbi is also from late eighteenth century. On the first altar on the left of the entrance, there is a painting depicting the Death of St. Joseph, one of the first by the well-known painter from Salerno Pasquale Avallone (1884-1965) who also created the bronze bust of Matteo Ripa, today placed in the green park in front of the main entrance of the institute dedicated to eastern studies.