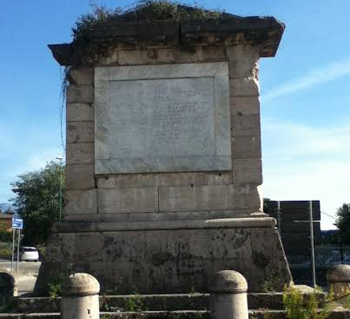 The "Via del Grano" is an ancient eighteenth-century road traveled for transporting grain from the lands of Puglia up to the capital of the Kingdom of Naples. This important thoroughfare, linking the “Principato Citeriore” and the “Ulteriore” (currently provinces of Salerno and Avellino with Basilicata) during the nineteenth century, was commissioned in 1789 by King Ferdinand IV of Bourbon on the proposal of the Marquis of Valva, Superintendent of roads and bridges, and had the function not only of uniting the towns of Campania and Basilicata, from Eboli to Melfi, but also to ensure the transport of grain and other foodstuffs of the fertile plains of Puglia to the capital city, Naples. Still a tangible sign of the historic route is the Epitaph monument, dating from 1797, built in a rural district of Eboli, which takes its name from the memorial, and has an inscription that reminds us of the opening of the street.