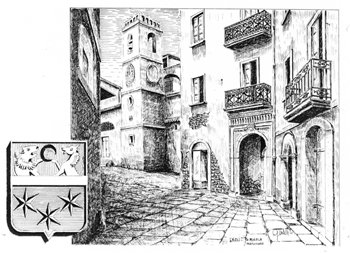 The wealth of the Corcione family Corcione, once Barons of Latronico, is evidenced by the possession of a chapel with burial in the Church of San Francesco, of an altar with the title of the Blessed Virgin of the Rosary in the Church of Our Lady of Grace and Chapel at the in the Church of the Annunziata in the Holy Trinity chapeò. This family was among the most illustrious of Eboli and they took an active part in religious and political life of the city: thirty components asked to become priests, twelve were mayors of Eboli and also included an abbess of the Benedictine monastery. In the cadastre of 1753 the following was stated: "Corcione Donato, head of the family, Angelica Tanza, wife. Pasquale, Caterina, Domenico Antonio, children. Five service people. They live in palace house in the area called Pennino. It has a farm , a vineyard ... a defense to the Mount of Eboli, a defense to Grataglie, olive groves at the village and Paterno, a house, twenty buffaloes, four oxen plows, a mule. "

In Piazza San Nicola, in Eboli we can find the noble palace of the XVI century that belonged to the Corcione Family. The building, which originally occupied a very large area has undergone a number of changes that have distorted its original appearance. Currently it has an “L” shaped base with a courtyard, in which there are only a few items. Particularly interesting is the arched doorway surmounted by a broad molded stone frame and a frieze with triglyphs. The family's coat of arms consists of a blue shield with a red band: on the top are two lions supporting a half moon; in the bottom three stars with six rays, all in gold. To the right of the hallway is the staricase formed by a single rampant covered with a barrel vault and stone steps.