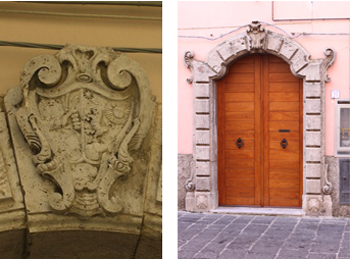 The Romano family, among the most famous and ancient of Eboli, took active part in the religious and political life of the city: twelve members of it asked to become priests, four were mayors of Eboli, the other two were notaries; among the various members Giuseppe Romano stands out for his work as a writer and Antonio Romano who was an archaeologist and writer. The wealth of the family is evidenced by the possession of the church of St. Anna in Portadogana, of a chapel in the church of Santa Maria delle Grazie, and of its own burial in the church of St. Francis of Assisi, in Eboli. The Romano were friends with various noble families in Eboli and there was also a marriage between blood relatives: Francesco Antonio Romano and Antonia Criscillo who were cousins and, after obtaining the papal dispensation and a done of penance, got married in 1636. From the Cadastre of Eboli in 1753 results the following: "Antonio Romano, head of household. Rosaria Fungaroli of Caposele, wife. Angela Criscillo, mother. Suor Colomba, sister. Rosa, Mariangela, Berniero, children. Two servants. He lives in house of his property in St. Anna. He owns : a house ... an olive grove ... a vineyard. "

In Via Attrizzi the Romano owned a noble palace from the 17th century. The main building consists of three balconies with stone molded shelves above of which, in the attic, there are lobed openings; the first level is the stone portal with decorations. The keystone is home to a fine coat of arms depicting a shield divided into two sections: on the left, a hand squeezes three wheat strands; on the right, a rampant lion topped with a sun and a comet. A molded frame crowns the building.