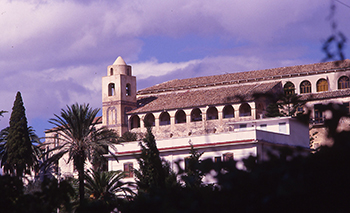 The basilica in situated at the bottom of the hill of Montefedoro. It was declared National Monument in 1930. Its construction ended in 1156 although it is thought that it might have been built before this date in 1076 and that King Guglielmo only restored it 1156. The first to have lived in the convent were the Benedettini fathers who owned it until 1577 when it was given to the Minimi fathers of the order of San Francesco da Paola. In 1743 Benedetto XIV gave the abbey to the College of the Chinese which kept it until the military occupation by Napoleon in1806. In 1886 the Cappuccini monks settled into the church and are still currently living there. In 1928 works of liberation of the church and its baroque structures began. In 1929 several parts of the church collapsed and only part of them could be restored. During the restoration the crypt was found. 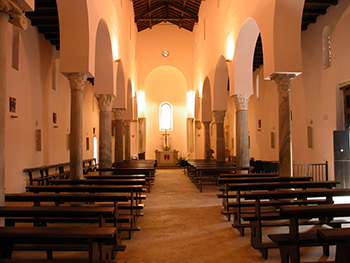 The main entrance of the church is accompanied by a staircase that connects the square with the church: the entry, originally placed on the wall opposite the apse located to the west, now opens along the right aisle and consists of a simple stone portal, with family crest of Carafa. Along the walls of the nave there are twelve single windows, and another twelve on the walls of the aisles, all made of stone pierced to create geometric and stylized floral patterns. Of these only a few are original, the other were rebuilt during the restoration in the thirties. The flooring is in concrete. Of the frescoes that decorated the church remain only a few traces in the side apses. In the apse of the left is a representation of the Risen Savior, flanked by the figure of St. Andrew and St. Peter, depicted larger. The entire fresco is topped by the image of the cross. The right apse is frescoed with images of Saint Francis, identifiable by the stigmata, the book and the cross he is holding in his hands, while on the left there is the depiction of St. Anthony as a Friar Minor with the lily and the book in his hands. . 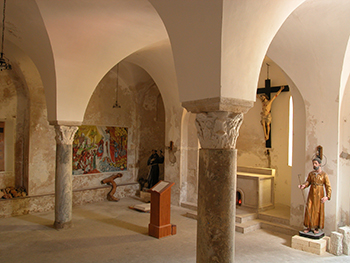 According to historian Carmine Giarla, the frescoes can be dated between 1564-1578 and attributed to Giovanni de Luca Luca, son of Giovanni de Luca Magistro, author of the frescoes in the apse of San Francesco. A staircase leads down the aisle inside the crypt where the body of San Berniero is venerated, he is the patron saint of Eboli, who was invoked for diseases and spiritual and demonic possession. His qualities as an exorcist are well expressed in bas-relief that is still preserved today in the crypt, with the saint dressed as a pilgrim, depicted with the stick in his hand in the act of hunting the demon from a possessed. The crypt, which extends below the apse, is rectangular in shape with vaulted ceilings that are set on pillars placed against the side walls and on two central columns. All around there is a fabric seat. The central apse, preceded by a round arch, has a stone altar inside in which there is the urn containing the relics of St. Berniero. The homage of the crypt in San Berniero dates back to 1578 as reported on registration, placed on the back wall, by Cardinal Carafa. On the apse on the right there is preserved a wooden statue of San Berniero sculpted by Donato Villano of Naples, dated 1610. It represents the saint with a large halo and a stick in his right hand. In the apse of the left there is a wooden statue of St. Fidelis of Sigmaringen made by sculptor Giacomo Colombo in 1690. The saint, dressed as a Franciscan, holds a crucifix in his left hand and with his right hand he indicates it. He looks ahead, keeping his lips parted, as if he was speaking words of forgiveness to his executioners while they're martyred him. Next is the statue of St. Vincent Ferrer, built in the nineteenth century, he is a saint in cassock, holding a trumpet in his right hand and an open book in his left bearing the inscription in Latin "TIMETE DEUM ET DATE ILLI HONOREM ". 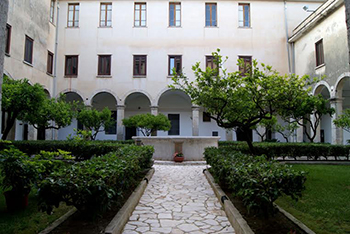 Around the middle of 1500 the minimum fathers began building the monastery, which is on three levels and around a square cloister bordered by round arches resting on square pillars. On key segments of the arches are the coats of arms of the families who helped the town of Eboli in the construction of the convent. The cloister leads to the rooms which house the library and the African Museum, set up by missionary friars. The Library, located within the premises of the Convent, is of great historical value, not only for the amount of books preserved but also for their beauty and rarity. In addition to books, in its premises are kept many old newspapers including L 'Osservatore Romano. What is common to the whole complex of the basilicas of the Norman period are the splendid decorative elements typical of the roman and campania architecture that decorate the outside of the church and the bell tower. The decorative party is characterized by a succession of gray tuff that contain in its semi-circular loops of yellow stone; the colourfulness is complemented by a series of irregular pentagons with yellow stone. This decorative technique is repeated on the bell tower which rises in the south-west side of the church. The bell tower shows a pedestal bounded at the top by a decorative band of inlaid gray tuff and terracotta tiles. The upper part has two rows of openings, a lower one and an upper one consisting of double lancet with the lancet windows. The terminal part is formed by a cylindrical drum with four single lancet which finish with a conical dome. On the square leading to the entrance of the church is the cell of San Berniero’s altar with a fresco depicting the saint dying, assisted by angels and cherubs. In one hand he holds a crucifix in the other and a scroll andalongside the bed, the pilgrim's walking stick.