Sanctuary of Saints Cosma and Damiano 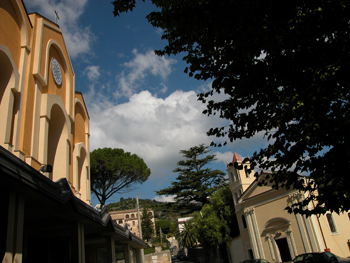 The Sanctuary of Saints Cosma and Damiano was built in mid-twentieth century to replace the old church, still in use, located on the opposite side of the current Shrine which was too small to hold all the people who came in pilgrimage from all over the region. The church was built around year 1000 by a colony of Greek origin who settled in Eboli and brought with them the worship of their saints. This Church was destroyed in 1164, was rebuilt on top the same ruins but dedicated to St. Sebastian, as the cult of the SS Cosma and Damiano had now faded. Only at the beginning of '700 the cult of the Saints Doctors revived. In 177 the church arose, in Baroque style. It was small but dignified where the Saints were honored for more than a century and a half, until 1957, when the new sanctuary was opened for worship. After the Second World War, after finding that the church was no longer able to accommodate the crowds of worshipers who came there in thousands on the feast day, the people of Eboli began to build a new and bigger place of prayer. 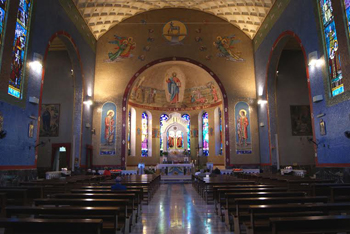 Between 1949 and 1950 the foundations were laid on land donated by the municipality for the construction of the new Sanctuary. The material used for the construction work was taken from the rubble caused by the war. Thus arose an unusual site: for the realization of the church the faithful turned into workers. The new sanctuary has only one nave and the side walls, the apse and the major arc are covered with mosaics. The Church has a series of windows decorated with stained glass windows depicting the life of the Holy Martyrs. In the sanctuary you can see two paintings; one depicts the "Immaculate" by Giovanni Bernardo Lama of the sixteenth century, the other a "Deposition" of the Sicilian school of 1700. The people of Eboli have always been very devoted to the Medic Saints, patrons of the City, and the religious holiday is deeply felt and celebrated on September 27 each year.. During the night, thousands of pilgrims reach the Shrine on foot from various parts of the Plains and many, as a vote for the miracles received, ran all the way barefoot. Even today many pilgrims retain the oldest votive of the City, reaching the Sanctuary "scauz", ie without shoes.