The Castle of Eboli is situated in a strategic position on top of a hill that oversees the entire territory of the Sele Plain. It is protected by two rivers, Tufara and Tiranna. The primary construction phases of the castle are still unknown. A hypothesis is that it was built on top roman remains by the Longobards or by the Normans. The first document in which the castle of Eboli is mentioned is from the eleventh century and it speaks about a donation made by the Urania countess to the monastery of San Nicola in Gallocanta e Patralena. Eboli became property of the Normans after 1054. In 1056 Guglielmo d’Altavilla creates the “Contea di Principato”. The County covered a wide territory making of Eboli an important capital. The Altavilla kept property of Eboli and its castle until 1156, year in which the county was suppressed and leaving soldier Guimondo die Mulisi as owner. It was then inherited between 1082-3 to 1090 by Emma de Ala. Eboli didn’t remain under Norman rule for long as they openly sided with the Swabians dunning the war between Henry VI and Tancredi di Lecce that took place in southern Italy. The war was widely documented in poems by Pietro da Eboli which were decorated with splendid miniatures.

When the Swabians took over the Normans the Ebolitan territory passed to the Crown administration. When Federico II became emperor he begins great construction activity and reforms, one on which is the statute for the restoration of castles with which the castle of Eboli is turned from a castle for military purpose to a palace for hunting and resting. With the Angioini Eboli returns to the Regio Demanio and its castle becomes home to the General Parliament lead by Carlo Martello in september 1290. From this moment on went through many different owners, often only for brief periods of time. The owners did not only own the castle and the city centre but also vast terrains of the Sele plain and the Tusciano. Under Carlo I it was owned by by Ottone di Tuzziaco and in 1315 it passed to Giovanna I ’s royal domain. Queen Giovanna II gave it to Antonio Colonna nephew of Pope Martino V. With the Aragonese, Eboli was given in fief to Baldassarre della Ratta Count of Caserta, his daughter Caterina della Ratta came in second marriage to Andrea Matteo Aquaviva who sold it to Ferrante Sanseverino in 1522, the Prince of Salerno and Duke of Villaformosa. In 1555-56 it went to Rodrigo Gomez de Silva Duke of Pastrana, him and his wife liked to be called prince and princess of Eboli. They detained the fiefdom of Eboli only for a few years because in 1567 the Genoese Nicolo Grimaldi became the owner of the castle. When he died without heirs, the castle, on the orders of the Royal House was valued by Pietro de Marino and rated for 149,000 ducats. The estate passed to the Doria D'Angri who owned it until the abolition of fiefdoms which occurred in early 1800. The last families that were able to enjoy the beauty of the castle were the Romano - Avezzano - La Francesca and it was later acquired by the Ministry of Justice. 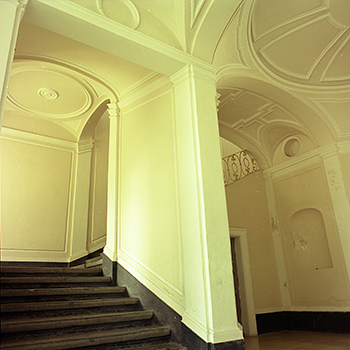 The castle today is the result of various enlargements throughout the centuries. It’s terrain today is rather irregular. Several walls, square and circular towers built in modern times cover the original configuration. However some shapes are still reminiscent of the Swabian and Norman era. Still present in the towers are the different peek holes used by soldiers to shoot their arrows. Other towers are now inside more modern buildings which were built around them. The original entrance to the castle, protected by the two towers is clearly visible, facing north, where another door is present and which had, at the time, a drawbridge. Inside the castle a church was built in the mid-twelfth century, the church of San Marco.

The castle currently hosts the House of Detention I.C.A.T.T. and it is not open to the public.