The Crucifixion by Roberto de Oderisio 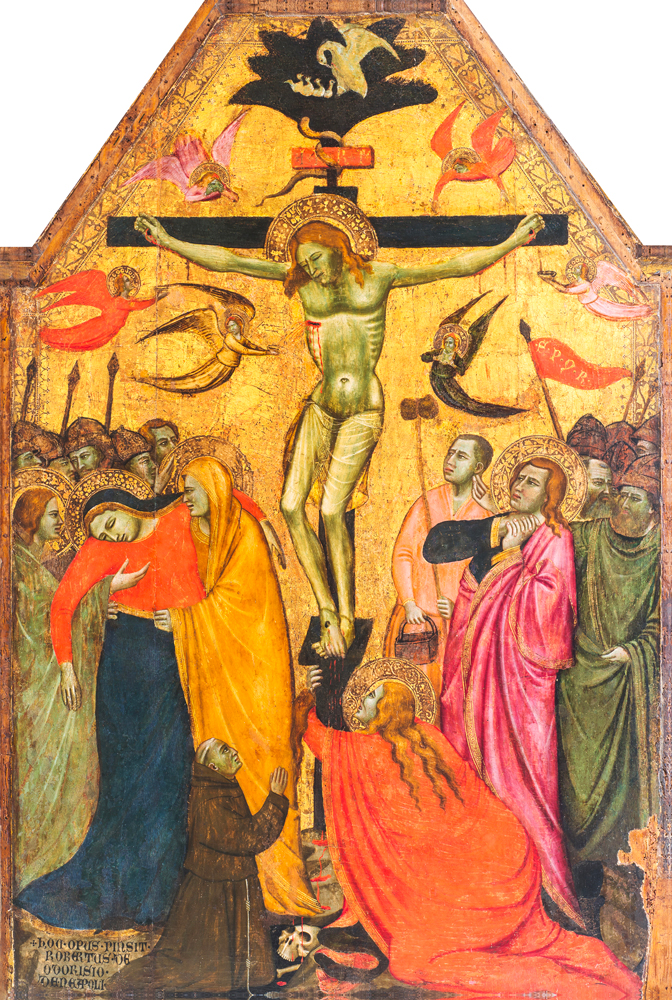 The “Crucifixion” by Roberto di Oderisio is one of the great masterpieces of the Giotto school of painting of the fourth century. On the golden background you can see Christ on the cross. By his feet you can see Mary Magdalen hugging the cross in desperation. Flying angels collect the blood coming from Christ’s chest. On the left you can see the Madonna, fainting from the pain and held up by other women. On the right is St. John in pain, along with some other characters. In the background there are soldiers. On top of the cross there is a pelican that is taking meat from its own chest to feed her offsprings.

Roberto de Oderisio is one of the artists that stands out within painters that aided and/or were followers of Giotto in the Neapolitan region. However there is only one existing painting with his signature: the Crucifixion.

In 1382 King Charles III of Naples welcomes Roberto to his family. This was a great honour and shows the social escalation by the painter from a craftsman to a person worthy of the royal family. Roberto de Oderisio is named Royal Master Painter and is given an annual pay of thirty ounces of gold.

The Crucifixion shows artistic traits very similar to Giotto’s own along with other influences. The dating of this painting is still uncertain. Ferdinando Bologna retains this painting to be a real convergence point of the major Giotto culture of the decade between 1330-1340”. Although many disagree with this decade being accurate, some dating the painting 1340-1350 or even 1360-1370. Other than typical Giotto influence the painting presents characters of strong Sienese influence, such as decoration overloads and a preference for “chiaroscuro” chromatic choices. Reminiscent of Giotto are the angels emerging from the background and the style Christ in painted in. The hallmarks in the halos, all with different motifs and the fading gilding of the soldiers helmets are all of stylistic influence from Siena.

The scene takes place in a narrow space, compressed by the extension of the upper part of the cross which is transformed into the “wood of life” or “tree of life” around which is wrapped the biblical snake and above it is the pelican feeding its offspring with her own blood, symbol of the supreme sacrifice of Jesus and also of mercy. This symbol of the pelican is also present in another painting by Oderisio, the “Pietà”, conserved in the United states at the Harvard University of Art. At the foot of the cross we can see Mary Magdalen, hugging it. On the left is the Madonna fainting and held up by other women and on the opposite side we can see St. John. On the golden sky we can see angels collecting the blood pouring from Christ’s chest and hands. In the background there are armed soldiers. Behind the Madonna and St. John there is a Franciscan monk kneeling in prayer; this is without a doubt the man who commissioned the painting who’s identity is unknown. Moreover the size of his figure is smaller than that of the other characters present in the painting. The size of characters at this time revealed their hierarchy, the bigger sizes being reserved for saints, Christ and the Madonna.

The painting has gained recognition and has been quoted by many scholars.

The painting has was restored in 1953 and again in 1984. It was exhibited in Rome at Complesso del Vittoriano in 2009 at the exhibition dedicated to Giotto and the fourteenth century.

Roberto di Oderision, painter, is documented in Naples in an act of February 1st, 1382 as a painter of the court and relative of king Charles III of Naples; a title that before him had only been given to Giotto and Montano d’Arezzo.

In Naples he created frescoes of the “Biblical Stories” and “Sacraments” for the church of the Incoronata which have now been moved to the church of S. Chiara.

These frescoes show that Oderisio was up to date with the painting of his time, with influences of Giotto and Maso di Banco.

His works are held in London and New York.