The Triptych of Pavanino da Palermo 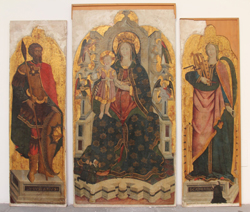 The Madonna is seated on a throne, with the blessing Child. On the sides there are two saints: Eustace and Catherine of Alexandria. The painting is among the most significant of the Renaissance in the southern Campania and certainly represents a landmark for the pictorial ways that no the one are related still to the Gothic experience, with the use of a golden background, and on the other is fully Renaissance, with the throne in perspective and luminosity influenced by Piero della Francesca.

Pavanino da Palermo worked in Salerno, Castellabate and Eboli. His triptych “Madonna with Child” is conserved at the church of St. Francis in Eboli since July 12th 2014; this painting is important for the study of art in the 15th century in the area south of Naples. This piece had been stolen from the church of S. Biagio in Eboli. It was later found by the Carabinieri for the protection of cultural heritage and the superintendence BSAE of salerno and Avellino. The triptych of Pavanino Palermitano has at its centre the Madonna seated on a throne with the blessing Child, standing on her knee. The throne is polychrome marble, and in gothic style. By the madonna we can see musician angels celebrating. The mantle of the Madonna is blu, it is rich in golden decorations and golden embroideries. She is wearing an elegant golden crown. On either side of the Madonna, standing on marble pedestals we can see two saints. On the left is Sant’Eustachio, on the right S.Caterina d’Alessandria, their names being written on their pedestals. They both are martyr saints, they are two od the fourteen Auxiliary Saints that are invoked for the healing of illnesses and to escape from dangers and troubles. S. Caterina is invoked to heal illnesses of the tongue, Sant’Eustachio to guard against the perils of fire. The first is elegantly dressed as a princess with an aura crown on her head, the second is dressed in the uniform of an ex-roman soldier, he is pictured holding a shield. At the Madonna’s feet we see two pleading characters on their knees. At S.Caterina’s feet we see a man figured kneeled in prayer; Carmine Giarla retains this might be Angelo De Jacobucio, who possibly commissioned this painting.
testo di Gerardo Pecci

Pavanino da Palermo was a painter from palermo, active in the Salernitan area between the seventh and eighth decade of the 15th century. His most important paintings are the triptych at the Parish of Castellabate and the one at the church of S.Biagio in Eboli. He certainly formed part of the group of Iberic Marchigian painters along with Perinetto da Benevento and Giovanni da Gaeta. The highest moment of his artistic production is one in which Piero della Francesca influence is very evident. His work show expressive traits of gothic art along with traits of renaissance origin and therefore a clear definition of Pavanino’s painting style is hard to find.